I have a Finally Fucking Finished Object (FFFO), a version of Branching Out by Susan Pierce Lawrence on the Knitty web site.

I've had it on the needles since August or so.

I wasn't actively knitting it that whole time, but I had a very difficult time with it and probably knit about twice as many pattern repeats as ended up in my finished scarf. If this is "easy lace" (as billed on Knitty) then I'm not cut out to be a lace knitter.

(I haven't given up on knitted lace yet though.)

It's made out of some mystery yarn on a cone that I got in a Newton's Yarn Country sale. The yarn is soft, light and fluffy. It's not very elastic (and therefore not the smartest yarn to use for a first lace project. Oh well). My swatch was completely unaffected by the washer and dryer so I don't think the scarf is going to be "blockable" per se.

There are still a lot of mistakes—but most of them are relatively invisible, even to me. The one that isn't invisible (but I'm too lazy to fix) is that the first 1/4 of the scarf is "inside out." I noticed quite a while later that I had switched the right side and wrong side rows. It's still probably not noticeable to anyone but another knitter.

Design decisions as a result of mistakes department: 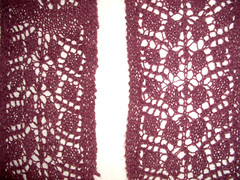